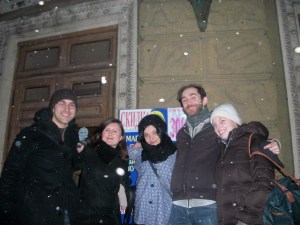 In spite of the snow… here we are!

The subject of the next non-Russian Russian speaking club will be “How you imagine your life in 10 years” (probably still a jobless volunteer in Ukraine!). Oh well, when I proposed such a topic I thought it would be very easier… but after a few minutes spent biting the tip of my pen and looking around searching for ideas I realized it was tougher than I imagined, especially when you have to think about your future plans in Russian. By the way, if you want to know, in the end I collected some ideas, and set up a good plan for my future… I’m ready for the next Russian speaking club!
As soon as I arrived in Ukraine, I understood that having studied Russian for 5 years in Italy was not enough to communicate, that knowing how to inflect cases and verbs was not enough to talk to people. And here in Ukraine, when it comes to communication problems, you immediately understand that you cannot count on Ukrainian people to try to speak English. As soon as they see you cannot speak their language they just turn their head or just say a lazy “нет английского”, usually with a grin which makes you feel a real idiot for not speaking Russian. At worst, especially when you try to speak to older people, they just shout at you or grumble something completely unintelligible. Also in the second case you will feel like an idiot!
So, “If Mohammed will not go to the mountain, the mountain must come to Mohammed”, where Mohammed is Ukraine and we (foreigners) are the mountain.